So, are these ’Hell’s Gate” in Turkey’s Pamukkale stories true or just a myth?

There is probably a no better way to prove one’s courage than by walking straight into the gaping maw of Hell, the Hell’s Gate of which can be found in Pamukkale. This legendary temple doorway was spewing out toxic gases and was referred to as the “gateway to the land of the dead”, and as some say to the lair of the evil one himself.

The gate was discovered in 2013 in the ancient city of Hierapolis in Pamukkale in southwestern Turkey. and was a place of ritualistic satanic worship, or so rumor has it. Still, it is a Plutonian religious site dedicated to the god Pluto, sometimes referred to as Pluto’s gate.

According to the same rumor, the three-headed hellhound under the ground was sacrificing innocents to Hades (Pluto), whom he accepted as a god. Because of this legend, the Temple of Apollo was built right next to the Gate of Hell (Plutonium). Now those who came to this city began to pay the clergy to sacrifice to the gods.

During the ritual, a clergyman would first take the animal to be sacrificed into the temple. Inside the temple, the animal died instantly, as if by divine intervention! The priest was coming out of the temple alive. For many years, people wondered why the animals died while the clergy who entered the same place remained alive.

True or just a myth about Pamukkale’s Hells Gate spewing out toxic gas?

Because hot water was accumulating in the temple and carbon dioxide reacts with water, carbonic acid is formed, from which hydrogen ions dissociate, increasing the acidity of the system. Carbon dioxide is heavier than air, when the air gets colder at night, the gas accumulates on the floor and the ground is covered with deadly gases, which could be deadly for small animals. In religious ceremonies at that time, priests would hold their breaths and go to the cave with live animals. As if there was divine intervention, the animals were poisoned and died due to the gas inside, while the priests stayed alive. Thus, the priests were considered sacred, and the dead animals were considered a sacrifice to Hades.”

Because the Hell Gate, which is located around the temple today, is a very peaceful place full of clear waters. Although the ancient city is peaceful now, some curious scientists decided to follow this legend, which is also mentioned in historical documents. Hardy Pfanz, a volcano biologist at the University of Duisburg-Essen, visited Pamukkale in 2013. When Pfanz got here, he wasn’t quite sure what to find, what to expect. These stories could be just legends. However, he got the answers to the questions he was curious about very quickly.

Pfanz began to analyze the surrounding air with a portable gas measuring device he had brought with him. While the carbon dioxide rate in normal air was around 0.04 percent, this rate reached 80 percent around the temple.

According to scientists, even exposure to 10% carbon dioxide for a few minutes is life-threatening. As such, it turns out that the amount around the temple is indeed deadly.

So animals closer to the ground were quickly affected by the carbon dioxide. But because the clergy was taller, they inhaled less carbon dioxide. That’s Pfanz’s theory. Many scientists confirm this. Today, Hell’s Gate is built with bricks to prevent people from being exposed to high carbon dioxide. However, there is a walking path around Hell’s Gate so that visitors can see the historical structure.

Hierapolis is a fascinating place even in its final form. This ancient city, where mythology and earthly reality meet, is definitely worth seeing! 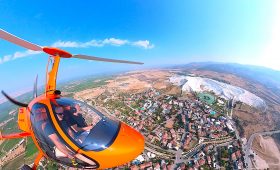 Is Gyrocopter at Pamukkale Safe ? 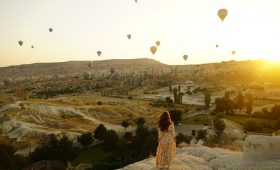 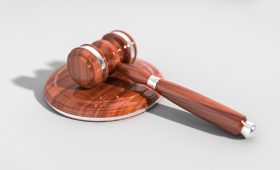 Which Laws to know as Tourists when visit Turkey?